This browser is not fully supported by smartandsexy.com. To properly view this website please download one of the supported browsers Chrome, Firefox or Edge.

Swimwear That Suits You 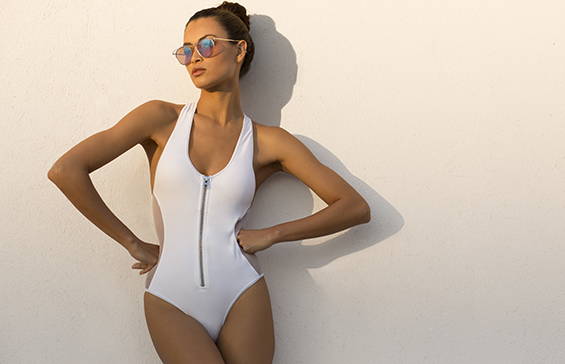 Hate shopping for swimwear? Trust us, you’re not alone. As a Women Owned company, we understand the struggles women face when it comes to the pressure we feel during swim season to look our best while bearing it all. We’ve made it our mission to design figure flattering swimwear for all body types, so regardless of your shape/size, you can tackle the beach in confidence. Finding the perfect swimwear is all about highlighting what you’re working with.

One of the season’s hottest trends is here! Compliment your curves in this Baywatch inspired One piece Swimsuit! If you’ve got it, flaunt it! This one pieces hugs you in all the right places. Designed with extra cheeky back coverage and a low scoop back, perfect for highlighting your beach bum.

Our Full Busted Long Lined Swim Top is made especially for larger busted ladies who want to show a little skin without sacrificing support. Perfect for taking a dip or laying out in the sun, this swim top comes with a cute center bow accent, underwire support, lightly lined cups and a broad range of fuller sizes!

Show off your figure

Every woman needs a LSB (Little string bikini)! Confidence is key when wearing this sexy set. This triangle top and super cheeky bottom will allow you to get a thorough tan and show off your gorgeous figure. This string bikini is the trick for packing light this vacation.

The one piece you love now comes in four brand new colorways! Show off your personality with our popular prints or make a statement in our new solid shades! This slimming retro style one piece is designed with a low-cut racerback and high cut leg openings to elongate your legs. Enjoy the trendy zipper front detail that gives you the option to unzip a bit for customizable coverage ;)